The ABH Foundation, since 2018, has been encouraging local organizations, community centers, collectives, and social businesses to develop activities that, in different ways, collaborate with the development of their regions and communities. This is called local community development.

In this article, we will explain what this practice is, how it is essential and relevant for all citizens of a given community, and how the ABH Foundation understands that through this type of developmental practice, we can collaborate through the generation of social impact.

What is Local Community Development

Local community development is the combination and orchestration of a series of actions aimed at reducing inequalities in a given region or neighborhood.

The main proposal of local community development is to generate solutions to a group or community’s specific problems, exploring their potential, characteristics, and assets. The issues identified in a community may be of political, economic, social or environmental nature, and they should be perceived, felt, and expressed by the members of the community themselves.

Organizations that work according to local community development practices, such as the ABH Foundation, believe that those experiencing issues have the full potential to collaborate to find solutions for such problems.

Local Community Development is an approach that generates change from the communities and not just for them. If communities focus on what they have – gifts, talents, and assets – they strengthen what they know how to do and what they are already capable of. Therefore, they can plan their changes. This journey consists of the following steps: 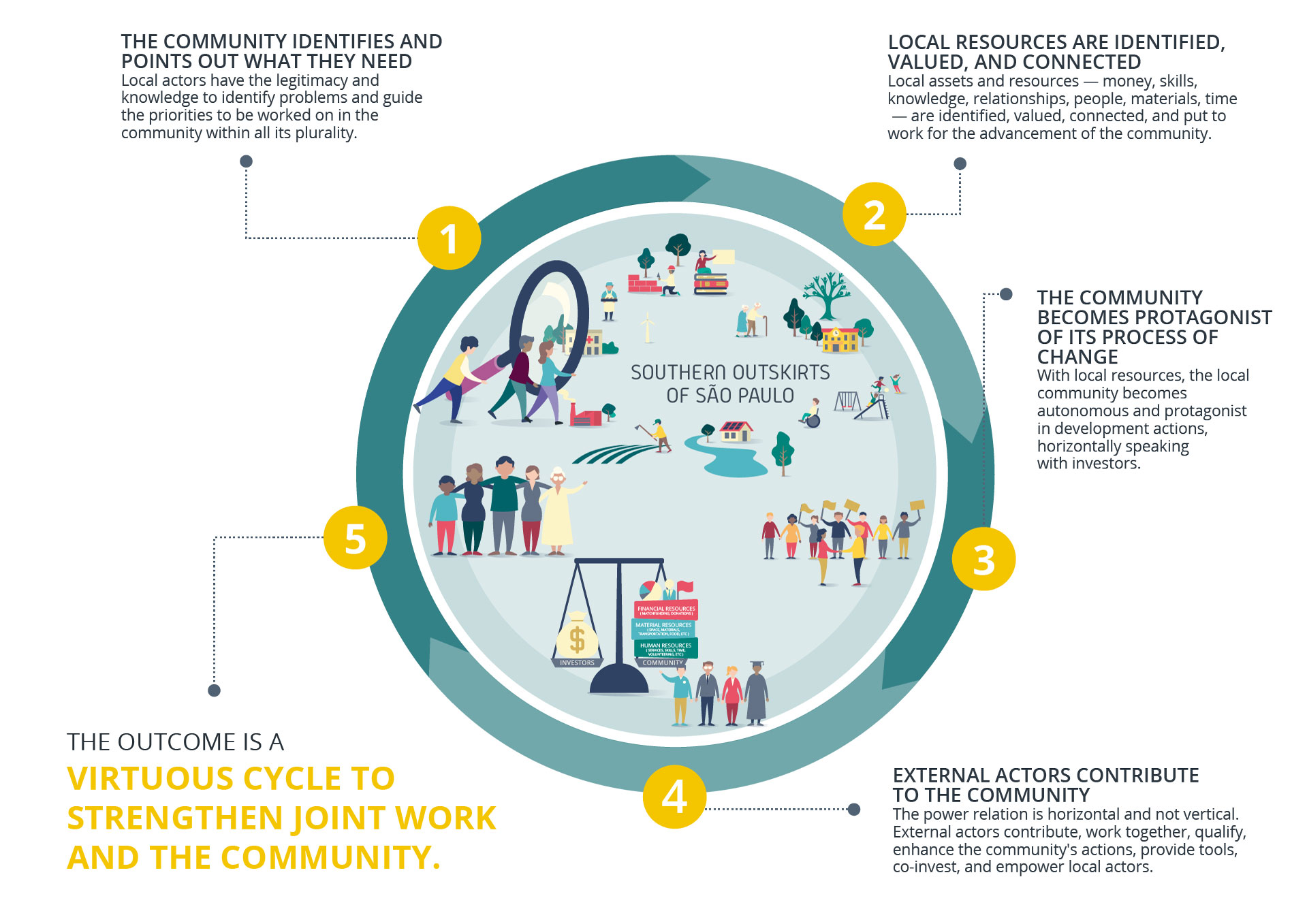 The Importance of Local Community Development

According to the local community development perspective, when there is the active participation of those involved in the process, there is a higher chance for more sustainable and lasting results. Also, the use of local and public resources is enhanced, since no one is better than the users themselves to say what is necessary for each need and to solve each problem.

Local community development does not come about single-handedly. It is the outcome of the efforts of multiple actors, who carry out actions over several years in a given local community, seeking the solution of one or more problems and focusing on finding alternatives for local and regional development.

Encouraging local community development focuses on the importance of political decentralization and on the relevance of cooperation between many stakeholders for local development to take place from the inside out.

Local Community Development as a Tool for Impact and Social Change

Each community has geographical, social, cultural, and economic characteristics. Therefore local development projects are not standardizable and should be idealized and thought out together with those who will be enjoying the benefits of the local community development. The process of participatory calling and the articulation of people who will dream and design, plan, and visualize what this future life will be like is already part of development.

The focus on development from the inside out, so that there are autonomy and independence in creating the desired futures, is the premise of local community development. The change that takes place from the inside out – from the existing resources in the community – also allows the construction, little by little, of the capacity and the support bases for common reactions to threats that may come from outside the community.

Based on values such as generosity, leadership, ethics, and discipline, the ABH Foundation was founded seeking to transform the world by qualifying people, investing in talent, and using knowledge and technology to minimize poverty, generate income, and optimize resources for the benefit of everyone.

Marina Fay, president of the Foundation, says that “Since 2015 when we started sponsoring projects, it has always been part of our DNA to listen to those who are sponsored and seek ways to be more relevant.” We didn’t want to be another actor and ‘do more of the same,’ but to look for ways to fill gaps in the sector and contribute to the work that has already been done. As a family foundation, we have the flexibility to test new models and look for ways to be more effective in our social activities”.

Our range of activities has always been geographically close to the southern region of the capital of São Paulo. In 2019, to maximize the impact of the investments and be closer to the initiatives supported, we started to launch notices to finance initiatives developed on the southern outskirts of the city.

“It was like this, listening and being present in the communities supported, understanding their problems and potentialities and believing that collaborative actions are more powerful than isolated actions because we all have knowledge and skills that can contribute to other works. We see in community philanthropy and local community development as a fertile and potent work ground”. – explains Marina Fay.

The district of Jardim Ângela (part of the subprefecture of M’Boi Mirim), in the 1990s, was classified by the UN as the most violent district in the world. A lot of local development work was done there, and today Jardim Ângela and its neighboring areas and neighborhoods have better conditions of life. Community work there is still enormous. Quebrada Orgânica was one of the projects supported by the Foundation in 2019.  “Quebrada,” in São Paulo, is young suburb slang to designate neighborhood, district. The project, created by residents of the community, takes organic waste composters and builds gardens in schools and public spaces.

Historically, in the city of São Paulo, population growth in the southern region was caused by economic accumulation and real estate speculation, which, like in other urban centers, pushes more impoverished populations further and further away from the centers.

In 2007, Folha de São Paulo published a report that became famous. It said: “For every murder in Moema, 130 individuals are killed in Grajaú”. For those not from São Paulo reading this blog, Grajaú is one of the regions in the southern area. In that same report, another alarming fact was highlighted: “The Grajaú neighborhood has the 7th worst average income in town (R$ 597.70), while the wealthy neighborhood (Moema) is positioned in second place (R$ 5,576.78). A difference of 10 times!

It was in the District of Parelheiros, where the ABH Foundation and the CPCD signed a partnership in 2015 to implement the Sementinha Project in Chácara Santo Amaro. The CPCD (Popular Center for Culture and Development), founded by Tião Rocha, is the social organization reference in the development and mobilization for the realization of community development projects based on local potential and knowledge.

In thirteen years, the situation has changed a little. However, the extremes of the southern region of the city of São Paulo still deserve a lot of attention and support to expand its socio-economic development. We can find rich data about the reality of the neighborhoods of the city of São Paulo on the Map of Inequality developed by Rede Nossa São Paulo published in 2019.

The ABH Foundation focuses its efforts and resources on investing in initiatives that arise from the communities to improve their quality of life, such as the Desenrola e Não Me Enrola communication collective, also at Jardim Ângela, which offers open training on communication for other collectives, cultural articulators and entrepreneurs in the southern area of São Paulo.

By encouraging projects that value local resources, fostering the local economy, valuing territorial development, cooperating with local actors, and providing access to services and rights, the ABH Foundation, alongside the communities, contributes to community development.

Marina Fay, President of the ABH Foundation, was a Fellow at the Center on Philanthropy and Civil Society at New York City University (CUNY) in 2017, which offers international leaders a professional development program through seminars and meetings with third sector professionals, research and best practice models.

The private social investment decisions of the ABH Foundation are driven by dozens of studies, interviews, and experiences that Marina Fay has participated in since volunteering for NGOs in Brazil, and taking a position at Médecins Sans Frontières in 2013 in Mozambique. As a CUNY Fellow, the Executive Director of the ABH Foundation researched the strategic allocation of resources to strengthen and develop community foundations in Brazil, which considerably directed the organization’s strategic action.

“With Brazil’s vast territory, the high percentage of rural and urban vulnerable communities, the current political landscape, and the high rate of established non-governmental organizations, community philanthropy is an interesting form of philanthropy to give voice to and empower vulnerable populations to tackle poverty and inequality.”