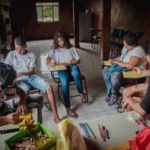 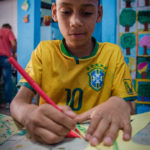 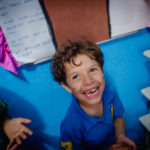 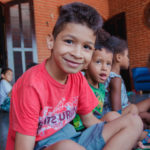 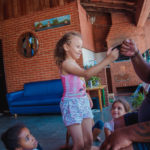 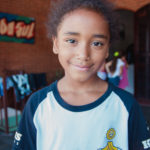 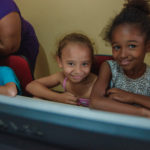 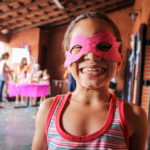 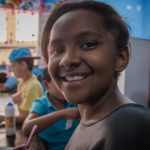 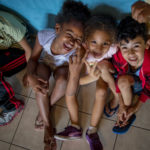 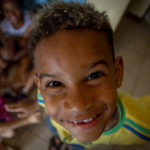 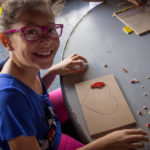 The NGO Interference has begun its activities ten years ago, in the neighborhood of Capão Redondo, located in the extreme south region of São Paulo. The project was created based on the writer Ferréz’s dream, founder and manager of the institution, of promoting transformation and social change in the periphery by turning the creative and inspiring universe of the books available. The goal was to create an environment where periphery residents could have access to education and culture beyond school walls.

Nowadays the institution is composed by a big living space, where children can gather together to enjoy the multiplicity of activities going on. Counting with the educators’ accompaniment, school reinforcement is offered, craft, yoga, capoeira, reading and writing classes.

The NGO Interference meets 80 children, aging between 6 and 16 years, offering activities from Monday to Friday, in two different shifts, from 8 AM to 12 PM and from 1 PM to 5 PM.

The project is composed of an Introduction to Journalism course, offered to 20 youth, ages ranging from 12 to 16 years, regularly registered in the NGO Interference activities.

The region of Capão Redondo needs communication initiatives that depart from the own community, promoting a bigger engagement of their citizens, therefore, better informed and protagonists in their search for rights.

The goal is to strengthen the tools of questioning and critical thinking, allowing people to have a better understanding of the news. Informed people can question and check the veracity of the new before passing ahead a fake new, consequently they become more apt to make decisions, to get better opportunities, to vote in a more consciously way between other things…There will be a better validation of the news and the contents that surround the community.

The biggest example of this type of success is the initiative idealized by “Enois Conteúdo”. There were held journalism workshops at the Casa do Zezinho NGO, for youth aged between 17 to 21 years old, during the years of 2012 and 2013. The success of this project was so big that generated other posteriors final products comprising other types of workshops.

The course will last for about 3 months, with the printing of a magazine “fanzine” as a final product.

To create it, 10 children of each period (morning and evening) will be selected, according to their affinity and aptitude regarding texts and reading, to create two classes. The lectures will be held twice a week, from 8 AM to 12 PM and from 1 PM to 5 PM, on Tuesdays and Thursdays.

The content to be produced will cover the social problems faced in the region and how to claim aid or public power rights. It will be presented texts about news and it will be held a discussion within the class, to assess the students’ comprehension about the addressed content. Subsequently, the students will define which topic they will work on in the magazine and which stories (guidelines) will be treated in the production of the texts to be published in the magazine. The educators’ role will be to direct the content to be worked upon and the journalistic way of writing. The themes will be decided solely by the students. The magazine will be produced based on the knowledge and guidelines developed from the texts and classes’ discussions. There will be no field research.

It will also be made a digital list with the contacts in the region (community partner network, NGOs and whoever is interested in receiving it), for delivery of the news via WhatsApp, in a way supported by this medium. The magazine will also be published in digital format and disseminated in the institution’s website and social media and on partner’s social network.

The goal of this publication will be to disseminate relevant information regarding the region of Capão Redondo and the social problems faced locally, using a language that residents of the community can understand and act upon. It is also expected from the students to acquire a better comprehension of the published and the read information, so they will become able to question the content of any other publication. 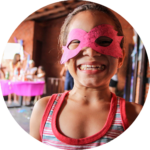 Objetives of the Investment

Do you want to learn more about the Interference?