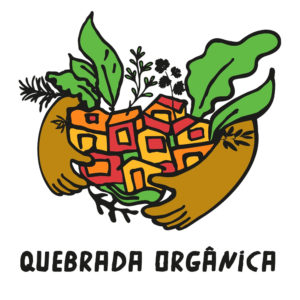 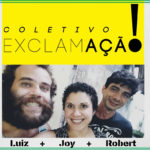 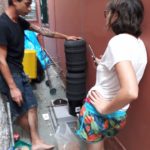 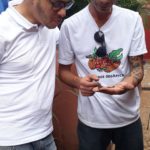 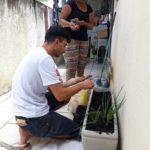 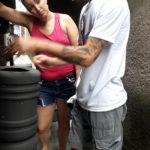 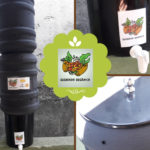 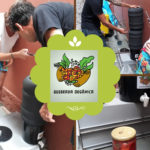 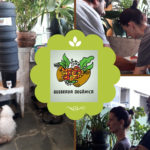 Organic Outskirts (Quebrada Orgânica) is an initiative by the Exclamação Collective that aims to minimize negative environmental impacts and address new consumption attitudes and sustainable practices in the “Outskirts” through composting waste, creating gardens and artistic-cultural actions that lead others to reflect on this theme.

The project consists in the production and installation of a new line of composters of Organic Outskirts (Quebrada Orgânica), which are larger than the previous ones. Seven of these composters will be installed in seven commercial facilities located between M’Boi Mirim and Campo Limpo.

Two gardens will be implemented and fed, one in a public square and another in a collective purpose institution (such as a school), located on the section located in between the participating facilities.

In addition, the “Organic Outskirts Seal” of social and environmental commitment will be launched, which aims to engage local businesses in the project. Once the facility is composing, it will receive the seal and have its name posted on our networks and in the local community.

Organic Outskirts (Quebrada Orgânica) exists because the members are residents and culture motivators, people who identified the possibility of positively interfering with the social and environmental issues of the community. Initially, they created a line of domestic composters that are extremely relevant, as most neighbors had never seen one. There are neighbors now composting and using humus and biofertilizer in their own gardens.

The impact on the community happens from the inside out, families reduce waste production and methane emissions, and inspire other residents, which makes the idea known, and other people seek out the composters.

The gardens allow therapeutic moments for people, the proximity to the land makes many to return to their roots. In the houses where gardens were created there are cases of neighbors who began to consume spices such as basil, which was not previously consumed because of the cost. Now these herbs give new flavor to the food in these houses.

The Quebrada project will be held throughout 2019, so it is pertinent to expand its products, its actions and its reach. Thus, if in addition to the neighbor, the neighbor ‘s son’s school, the cafeteria and other surrounding facilities also engage in composting waste, the reduction in negative environmental impact will be even greater. As well as increasing awareness and reflection on these issues in the long run.

The power of the collective will also be positively impacted, which will make it possible to replicate this initiative on a larger scale. It is understood that the Quebrada Project can and should be replicated; For this reason the line of long-term composters will be created.

A new line of large size composters for commercial facilities will be produced. The idea is to install the composters in schools, kindergartens, small restaurants, snack bars and mini markets located between M’Boi Mirim and Campo Limpo. Currently the composter we have installed for families is capable to operate 40 liters; In this new line the composters will consist of 360 ​​liters.

Only the facilities committed to compost their waste and to sign the commitment sheet with the project (a simple commitment, that describes the facility receiving the composter and states that the facility is aware of the purpose and social and environmental commitment, besides authorizing the use of the image) will receive the new composter. The selection criteria for the facilities are: to be located within the districts referred to, interest and commitment, signing the commitment term, and making sense for the Seal’s media dissemination process. Examples of these facilities are: Barba Burguer do Capão, which, although small, is well known; Carlão’s cafeteria is very well known in Piraporinha, the Bistro that the Solano Trindade Agency will open, Piraporinha’s nursery, etc.

At the facility, a workshop on the composting process will be offered to at least one employee of each facility. Follow-up will be done through visits, and electronically where participants will send photos, videos, questions and etc. Initially every 15 days we will talk and receive these photos and videos, plus 1 visit per month.

Both gardens will be fed with the excess of humus and biofertilizer production from these composters (in general there will be more biofertilizer surplus than humus because the latter is produced faster). Estimated size of the garden is at least 2x2m. At this initial moment, it is not yet possible to estimate the number of seedlings or branches (to be recorded by photo in the future) because the facilities have not been selected yet. Still, each seedling or branch has its planting period, it is not known what will have available for planting in the month of production of the garden. It is also not possible to estimate because, depending on the production of the garden, it may be more interesting to space one food instead of another.

The Quebrada team will remove what the facility is unable to allocate, as the facilities will be encouraged to take the surplus to their homes and distribute to neighbors. It may be that, for example, the school uses humus in its own green area, but the biofertilizer will not be used all the way, the Quebrada team will remove the surplus and make the best of it, including donating.

After a period of 30 days from the installation of the composter, we will return to the facility and, if all the process is correct until then, it will receive the Organic Outskirts Seal of socioenvironmental commitment. From that point on we will be able to disclose it as a committed facility, which has gone through a process and has received the SEAL. 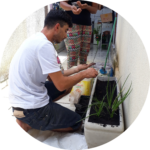 Objectives of the Investment

Do you want to learn more about the Capão’s Citizen Association?